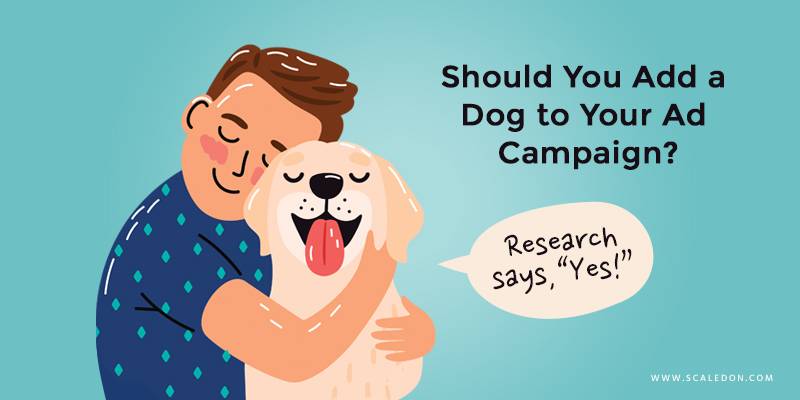 Who doesn’t find a wet nose and a furry face adorable?

Dogs and cats can melt the frostiest of hearts, and it’s clear that Americans love their pets. In fact, 68 percent of American households include a pet, meaning 85 million families own about 90 million dogs and 94 million cats.

Dogs, cats and other pets don’t just take up space and eat food in U.S. homes. Increasingly, people perceive their pets as much more than property. More than 90% of Americans polled say they consider their dogs and cats to be family members, continuing a trend that’s at least 14,000 years old.

Pet owners put their money behind their affections, too. According to the American Pet Products Association, Americans spent $75.38 billion on their pets in 2019.

Marketers who want to appeal to this new breed of families will have to take pets seriously. Very seriously.

For more than 10 years, researchers have known that consumers react positively to ads that include dogs. Researchers at Western Michigan University published an article in a 2008 edition of the Journal of Business Research in which they claimed, “The presence of the dog increases heuristic processing, concurrent processing, and ultimately attitude toward the ad.”

The first dog appeared in an ad in 1900 when a gramophone company used the image of a furry fellow named Nipper in a campaign called “His Master’s Voice.” Nipper’s ad still draws plenty of attention 12 decades later. Since then, dogs have helped sell beer for Anheuser-Busch, bus tickets for Greyhound, and general merchandise for Target.

Why should you add a dog to your ad campaign?

Americans don’t just keep pets, they also care for and identify with them. Nearly three out of four Americans let their dogs on the couch and almost as many allow them on the bed. Half of our canine companions go on playdates, and more than that accompany their owners on vacations. Pet parents are especially cautious about food for their animals, with only a third claiming to feed them human food.

It’s more than care and affection that binds people to their dogs, however. It’s also identification. Dogs’ fetching lack of pretense means they often seem to show the emotions that people can’t or won’t demonstrate. Plus, dogs help people feel better. Study after study shows that interacting with pets helps people reduce stress, improve happiness, and ramp up cardiovascular health.

People’s relationships with their pets run deep and can work to your advantage when marketing your products.

5 effective strategies for marketing with pets

The ethics of using animals in marketing

From a moral and ethical perspective, is it okay to use animals in marketing campaigns? In general, yes, if you follow a few common-sense guidelines.

First, avoid using brachycephalic breeds such as bulldogs. These animals have trouble breathing, and many animal ethicists would like to see their popularity reduced. Also, no dogs with cropped ears or docked tails since those cosmetic procedures can be painful to the animals.

In addition, you’ll want to avoid showing the dog eating anything dangerous or poisonous such as chocolate or raisins. Finally, don’t put a dog, cat, or any animal in a costume. It’s cute, but animal lovers will note how uncomfortable and unnatural it can be. Some dogs may love to dress up, but most only tolerate it at best.

Using a dog or another furry, feathery, or scale-y actor in a YouTube video, social media ad, or print campaign can help separate your brand from the rest of the pack. And a creative spin that logically connects the animal to your product or service can give you a whole new breed of customer.